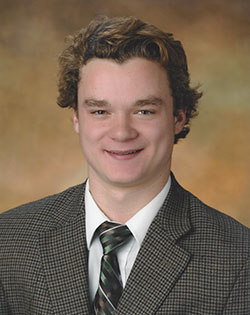 In a tragic hit and run accident Christopher Morgan '13 was killed on August 6, 2017. In honor of Chris, a scholarship fund has been established at University of Detroit Jesuit High School and Academy. Chris started playing hockey in Mighty Mites, and his love for the game grew. He made friends easily and always had a smile on his face. Chris played for U of D Jesuit and was part of the 2013 team that made it to the Frozen Four state semifinals. Chris was awarded the Chuck Gumbel '64 Most Dedicated Player award his senior year, voted by his teammates. He was a model for future years with his work ethic and commitment to hockey and fitness. 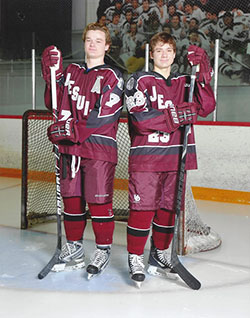 After high school, Chris headed to Ottawa to play for the Gloucester Rangers in the CCHL. He played there for two years. From Ottawa, Chris joined the Northland College Lumberjacks in Ashland, Wisconsin. He was part of Coach Gregory’s initial recruiting class.

“Chris was a true LumberJack – hardworking, dedicated and passionate,” Northland coach Seamus Gregory said, “He will be missed by everyone in our locker room, athletic department, campus community and beyond. Chris was a competitor, an unbelievable teammate who believed in LumberJack hockey. He had great respect for its past, and was a key piece of where we are today and where we are going tomorrow. For the alumni, family and friends and future players who didn’t have the opportunity to play with “Miggy,” the best way to describe him is he would block a shot for anyone, anytime, up by three in the first period or down by five in the third, it didn’t matter.

“He will forever be missed, never forgotten and always loved. Please keep his family, loved ones and teammates in your thoughts and prayers.”

Chris was well known for his infectious laugh. We love him with all our hearts and souls and will miss Chris terribly. Please keep all your wonderful memories in your hearts. 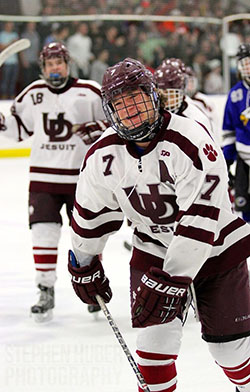 Please consider honoring Chris by making a donation to the Christopher T. Morgan Scholarship using the form below.